Start by registering to receive new listings as soon as they hit the market.

Mimico is the oldest of the former Lakeshore Municipalities.  The Town of Mimico was established by a plan of sub-division in 1856, but was not sub-divided from the former Township of Etobicoke until 1911. The land area of Mimico originated mainly from three family farms, namely: Stock Estate (North of Portland), Hendry Estate (between Royal York and Queens Avenue), Van Every Estate (between Royal York Road and Dwight Avenue). Mimico was an independent municipality until 1967, when it was amalgamated into the new Borough of Etobicoke (later, City of, in 1984), which was itself amalgamated in 1998 into the current city of Toronto.

Today, Mimico is primarily a residential area with two commercial strips; one along Royal York Road and the other along Lake Shore Boulevard West, parallel to the shoreline (from Louisa Avenue to Allen Avenue). There is also a former commercial strip along Mimico Avenue connecting Royal York Road and Lake Shore Boulevard West. Some areas of industrial use exist along the railway corridor. In early 2012, Toronto Life magazine ranked Mimico first on their “Where to Buy Now” list of Toronto neighbourhoods.  Energetic families and ambitious young professionals are now breathing new life into Mimico. This established Etobicoke neighbourhood is home to a growing number of exciting new eateries and waterfront condos. It also offers scenic views from Humber Bay Park, and quick commutes downtown via the Queensway. 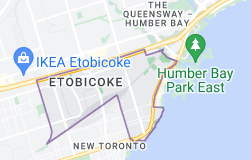